Why all the fuss over cleansing?  Because the simple truth is that you matter to a great many people.  While in my early twenties my responsibility toward those who cared for and relied on me was made clear when my husband’s family welcomed me into their hearts.  After a lifetime of living with indifference I received their acceptance a bit guardedly not sure if it would last or if I even liked it. My presence was desired not only at the dinner table but also all family gatherings.  I mattered to these people; if I felt unwell someone who cared would be reaching out with open hands wanting only to help.  In return all they asked was that I show up in my place.  The discovery that I mattered to these people grew into the realization that I wanted to be there for them.  The need to take care of myself not for my sake but for the sake of those who would feel the void of my absence took hold in my understanding. To not care for my own health is to prematurely remove my presence from the lives of those who need and care for me.

Today Tanner and I began our liver flush. We will be doing the incurables program until we don’t want to do it any longer. Tanner is working on a major health issue; I on the other hand am thrilled to have a cleansing partner.

We started our day with the day one liver flush drink followed by a large cup of the detox tea and the two shots of LG/AP & Detox drops. This was followed by our breakfast Superfood. Lunch was pretty much the mirror image of breakfast. We had our liver flush followed by another glass of Superfood. This evening we will change it up for dinner by doing an ELF.

How do I feel? Except for a mild head ache I feel great.

It is now 4pm and I’m in the middle of slowly drinking my carrot, beet, and cabbage juice. I’ve been sipping on a large glass of the juice for the past half hour and my headache has completely cleared. How amazing to see the power of nutrition at work. What a lift this glass of juice has been.

Tanner and I will keep you posted on our progress. We are doing a very aggressive program this month. I expect good things for both of us.

My energy is up, my head feels clear, and it’s all good. On day two of our juice fasting liver flush we still agree it is a good idea. One day at a time is the only way to get through any fast. The promise I always make to myself is that if I really want to stop I can. I never force a fast upon myself or allow guilt to mar the good work I’ve done. I agree to continue until I don’t want to do it anymore.

The hum of the juicer began at 8 am shortly after Jessica arrived. She presented us with our first liver flush of the day about fifteen minutes later. Day two liver flush is double the garlic, ginger & Olive oil from day one.

Yesterday ended very well. Except for incessant runs to the washroom, the day was a huge success. Even the washroom pee breaks proved to be a bit of comic relief. Tanner and I would be doing our own thing but invariably appeared at the bathroom door at the same moment both needing to be there very badly. This morning Tanner shared with us that he began checking out the look on my face before committing to a bathroom run. Smart guy

Day three of our juice fasting, liver flushing week and we are still going strong. We need to pick up more fruits and veggies for juicing. It is amazing how much produce is used when juice fasting. I feel great this morning, lots of energy. Last night we did an ELF for our last Liver Flush of the day. After we drank the flush we went downstairs to watch a movie while we laid on our right sides for the 45 minutes. One of our employees suggested “The Kings Speech” as something I’d like. She was right I thought it was an excellent movie.

Today our liver flush contains ½ cup olive oil, a lot of garlic and ginger root. Pretty strong stuff; this will get the liver moving very well, all the garbage is moving out. On that note I have noticed a need to increase the LBF #1′s. My bowels have slowed up a bit with all the liver dumps and heavy detoxing waste passing out. This is to be expected when doing a strong program. I think I’ll do a Prune Juice Flush Tomorrow. That should really clean me out. I’ll see if Tanner wants to do one too.

I’m sleeping much better even though I’m up several times during the night to empty my bladder. Yesterday I slowed down my drinking after 7pm and was only up one time during the night. Anyone who is juicing might want to consider drinking a bit less in the late afternoon and evening, if possible, when nighttime runs to the bathroom become excessive. If hunger or blood sugar is an issue, have an extra glass of Superfood before bed. 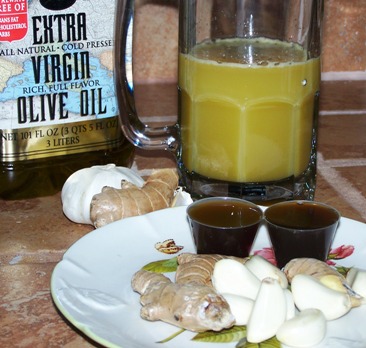 Today we begin stepping down the strength of the flush, easing off the olive oil, garlic, and ginger. Tomorrow will be a walk in the park compared to Wednesday’s flush, only 2 tablespoons Olive oil, a couple pieces garlic and thumb size piece of ginger.

Wow, the drama has begun. Yesterday afternoon my hands went south. I began having a bit of discomfort in my fingers around lunch time, by late afternoon I had no strength in my left hand and the pain was all but unbearable. I felt washed out all over. Surprisingly, no headache, normally a detoxing crisis will bring on a real banger.

Deciding to use my own advice I took an extra ounce of Echinacea in the evening. Within a couple of hours the discomfort in my hands was clearing and this morning I feel great again. There is still a little stiffness in my right hand but no real pain. When detoxing remember to dose up the Echinacea when any part of you begins to deteriorate. As the toxins are processed out your immune system must be able to neutralize the waste or your will become symptomatic. (Begin feeling bad)

Tanner did all three liver flushes yesterday; he is feeling a bit off today. I decided to skip the dinner flush and just have my glass of Superfood. Wednesday’s flush is the biggest one of the week and does a huge amount of work in the body. That said, No one is benefited by over doing the good stuff, the body can only process so much waste at a time. Detoxing is a great way to clear any issue but it is important to do the work wisely. If you begin feeling toxic slow down the flushing and do an extra dose of Echinacea.

The last day of any juice fast is always a good day. I feel really good this morning. No lasting effect from the detox crisis on Wednesday. Tanner and I are looking forward to a nice big green salad tomorrow. We are both completing a full week of liver flushing and juice fasting today. Starting Monday we will do a week of Kidney flushing. Tanner has opted to eat raw during his kidney flushing week.

I woke up this morning feeling so grateful to my husband for all the work and time he has put in on our new office space.  As I have traveled through this life I have been blessed with two loving companions, my heavenly Father who has been with me every step of my journey, and my husband who fell in step beside me nearly 30 years ago. Of all women I have been truly blessed to have been cared for and loved so well.

Over the years many members have expressed a reluctance to do the liver flushing part of the cleansing programs. The common excuses have been:

Everyone underestimates the power of the Liver Cleanse. Failure to do all the cleansing programs rigorously and repeatedly can cause you to NOT GET WELL. Members believe they are on the Incurables program, yet they are not regularly flushing their livers. They fail to understand how critical it is to repeatedly clear the waste from the liver.

We would all like to be handed some herbs in a bottle that will reverse, in a day or a weekend, all the damage, heal our diseases, and fix 30 years of unconscious living. There is no magic herb.